THE PIGEON DIARIES - episode one

(To find out about the FESTIVAL OF NOTHINGNESS click here.) 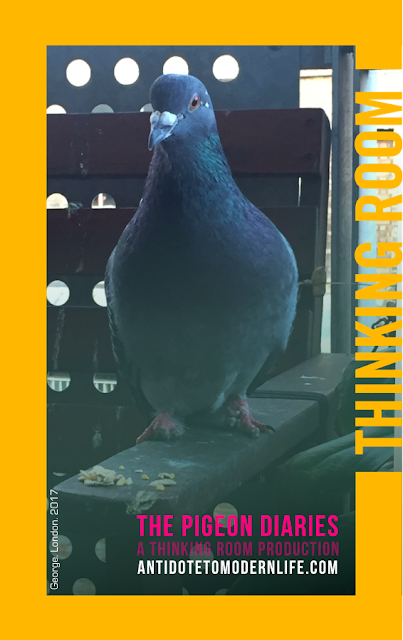 This story has been unfolding for about a year and a half. As I settled into the silhouette of "The Pigeon Woman" I've often wondered how the fuck I became her. She's not someone I had intentionally set out to be, unlike an artist, an aerobics instructor, a design strategist or a meditation teacher but I like being her. The Pigeons have taught me a lot about life, a lot about people, politics and a lot about pigeons.

When I started writing it was going to be a short blog post. It's not short. It's becoming my third book. Whilst I feel a little weird about it, I realised it wasn't about Pigeons, so I kept writing. I'm releasing the box set here as a series of posts. This is the first.

They started coming a long time ago.

Several years ago desperate to break through the lifeless walls of the ever-increasing Shoreditch tower blocks I decided to hang a small bird feeder on my balcony. As per instruction small, cute birds came to eat seed. They warmed my heart immeasurably. I find birds captivating, mesmerising and deeply reassuring amongst the gridlock of banal urbanity.

Soon after the small birds had noisily announced the arrival of the bird feeder The Pigeons came. The Pigeons couldn’t eat from the quaint, dangling bird feeder, they were too fat and clumsy, so they were relegated to loitering below, vacuuming up the droppings discarded by the favoured, cute, small, pretty, tidy little birds.

I hated the Pigeons from day one. I gave them labels like: big, clumsy, disrespectful, greedy, grunting. Ugly.

In the spirit of my innovative and obsessive father, I went to great lengths to create Pigeon deterrents. I strung thin wires above the railings so they couldn’t perch easily. I cut short bamboo sticks and knitted them into rambling, spiky scarecrows throughout my pot plants, so they couldn’t destroy my desperate attempts at cultivating life and greenery as they rogued around my two square meters of outdoor real-estate looking for a hit or having a shit.

My beautiful bird-friend Lisa responded to my torment with this picture: 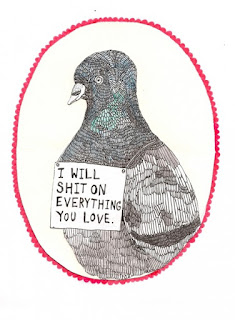 Thank you to whoever drew it. It's wonderful.

They shit a lot. That fact is incontestable.

I kept on feeding The Small Guys. The Pigeons kept on coming. There weren't many of them, just a few came each day, but it is another defining fact about Pigeons, just a few can feel like a hundred-strong-flock.

It was like that game small children play, where they throw the toy and you pick it up for them, it never ends well, one party eventually gets disgruntled. I got disgruntled.

One morning, as I drew-open the curtain, the large empty flowerpot was no longer empty. There was a small white egg in it. Perfectly formed. Surrounded by a paltry excuse for a nest: a few twigs and a piece of string. 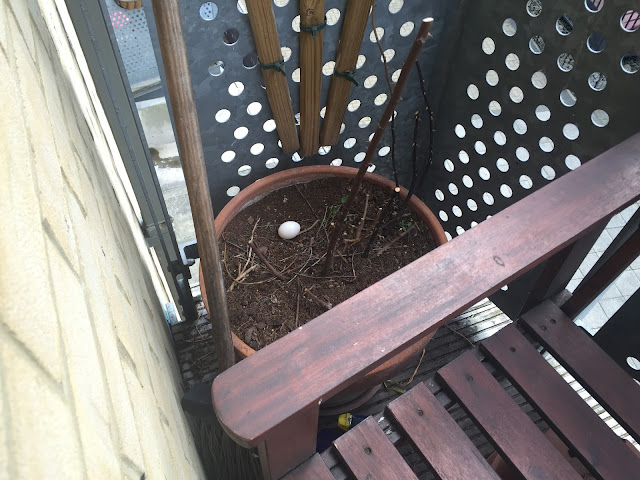 Often my first words of the day were simply, “Hello Goose.” I’m one of those highly functioning Londoners that lives a completely dysfunctional life in a tiny one bedroom flat, alone, but for Radio 4 and Pigeons to adopt as family. Beyond fever pitch politics and foundation shaking economics, I think this modern-city-single-household proliferation is going to break humanity. (I’ll park that story for another monologue.)

I looked at the egg a lot that day, with a perplexed gaze and a frown, trying to repress joy, knowing it had to stay there but walking through the options nonetheless. Was I mean or brave enough to throw it away? I was neither.

I called my parents, The Ornithologists, in the Southern Hemisphere. They were happy like expectant grandparents. Dad started gathering facts to feed to me via whatsapp.

The parents stayed close, George and Gladys setting up the nursery in their new home.

Three days later there were two eggs.
And George.
And Gladys. 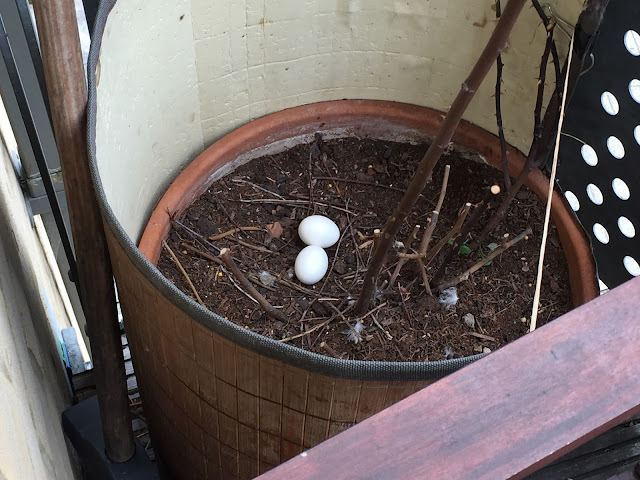 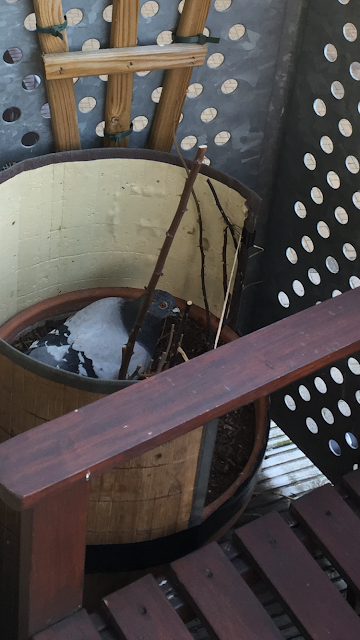 When they were out shopping one day I built a wall around the flowerpot, with a wood slatted doormat, so they would have shelter and the eggs would be safer.

“I built them a wall so they would be safer,” saying this out loud to myself was clouded with irony. We were just waking up to the arrival of Trump and his walls.

I consulted The Ornithologists regularly, my lineage to bird loving. I consulted The Book Of The Internet. I phoned the RSPB (Royal Society for Protection of Birds). They didn't think I was mad. They liked me. They told me I was legally not allowed to move the nest. I was gleeful in the face of Pigeon loathing Londoners.

I knew how many days until the Little Pijjees came: Seventeen.
I started counting.
I made a note on my iPhone calendar, with three alerts.

On day seventeen, when the parents were between shifts, I looked closely at the eggs, and sure enough, the Little Pijees were starting to squeeze their way out. The eggs were cracking. It was fascinating. Here on my balcony, amidst all this concrete, traffic fumes, police sirens, my dead plants and redundant Pigeon deterrents I was monitoring the maternity ward with the cluck of an expectant mother. 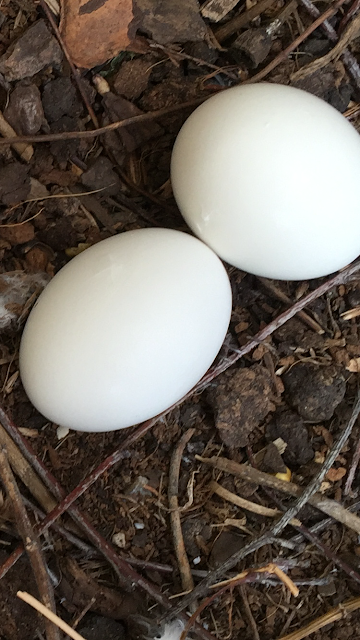 Their little beaks starting to make cracks. How awesome is that?

Tune in next week for the next episode, where you'll get to meet Hoxton and Shoreditch.
Posted by Barbra Amiss at 03:23